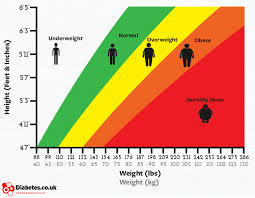 Recent research has revealed just how different people with the same BMI can look, and calls into question the medical profession’s reliance on it as a measure of health.

What BMI doesn’t take into account is that muscle weighs more than fat, and as a result anyone athletic, with a good muscle mass, would be classified as overweight or obese in terms of their BMI.

When working with weight loss clients we may have a brief discussion about BMI and what is considered to be desirable. But this is only one measure for healthy weight.

I weigh my private weight loss clients every week, and my scales also measure body fat percentage and hydration levels. Lowering body fat has to be a health goal, and it also allows me to identify those who have a healthier body fat ratio, and who are exercising and maintaining good levels of muscle.

Where our fat is stored is also very important. Visceral adipose tissue (VAT), that is fat which is stored around our middle, is associated with heart disease and other chronic illnesses such as diabetes. Losing fat around the middle should also be a health goal, and for this reason we take waist measurements as part of zest4life. Waist to hip ratio is a means of tracking the extent of your VAT fat. A waist to hip ratio of 1.0 or greater for men, and greater than 0.85 for women is considered to be unhealthy. To find out your ratio simply divide your waist by your hip measurement.

And finally, another thing that I take issue with is the lower end of the BMI scale. As someone who is concerned with women’s health, I worry about underweight women who are trying to conceive. Women with a BMI of less than 22 may struggle to conceive as their bodies may be under stress due to a lack of energy reserves and the ensuing hormone imbalance may not permit conception. Interestingly when farmers are preparing their cattle for breeding, they fatten up their cows, knowing that this leads to greater conception rates. Alarmingly as humans, a proportion of women who are trying to conceive are also equally concerned with weight loss! And another concern is that women who are underweight are more likely to develop osteoporosis in later life.

So let’s ditch one measure for gauging healthy weight and use a range of markers, whilst taking into account the dangers of being too light or too heavy.

Did you know that Vital Health Nutrition can tailor a weight loss programme for your staff? Click here to find out more.