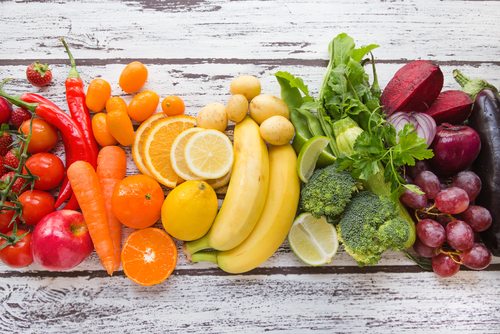 Colourful, varied fruits and vegetables do more than make a meal look interesting; they also come packed with chemicals that offer a range of potential health benefits. In this article, first published in the Spring 2019 edition of Optimum Nutrition Magazine, Lisa Patient writes about eating a rainbow diet:

Whether it needs protection from the sun’s rays, chomping insects and pests, or viruses and disease, a plant comes with its own in-built self- defence system in the form of chemicals called polyphenols. These give fruits and vegetables their colour or taste; and, in animal and human studies, have been associated with potential health benefits. Consuming a diet that includes a range of colours could help us get the best out of these clever chemicals.

Studies into the benefits of 124 types of polyphenols found in pomegranate link the fruit to lower blood pressure and reduced risk of cardiovascular disease. A mechanism for this is the way in which polyphenols reduce the activity of ACE, an enzyme linked to high blood pressure.(1) Taking pomegranate extract has also been found to reduce the severity of inflammation in people with rheumatoid arthritis, and studies on rodents have found that one family of polyphenols in the fruit, called ellagitannins, can be metabolised by gut flora into powerful anti-ageing chemicals in the muscles. (2,3)

Beetroot has been found to enhance athletic performance, because its nitrate content relaxes blood vessels, improving circulation (4). It has also been found to have a positive neuroplastic effect on the ageing brain; a 2017 study found that drinking a beetroot juice supplement before exercise made older adults’ brains perform more efficiently, mirroring the operations of a younger brain.(5)

Persimmon (sharon fruit) has been found to have almost twice the amount of fibre as an apple, and higher levels of a type of polyphenol called tannins. Researchers said that eating about 100g a day of the fruit “was enough to help fight atherosclerosis” (6) — although overall lifestyle and diet is important.
Orange fruits, e.g. butternut squash, pumpkin (technically fruits) and vegetables (e.g. carrots) are good sources of carotenoids which are linked to many health benefits, particularly to immune function, and to eyes and skin health. For example, the carotenoids lutein and zeaxanthin are found in the eye’s retina, and evidence suggests that consuming about 6 mg/day (roughly 200 g of squash) of lutein and zeaxanthin from fruit and vegetables may decrease the risk of age-related macular degeneration.(7)

Ginger contains many active ingredients, but the polyphenol called gingerol is the most studied. It has anti-inflammatory properties, and has also been shown to help reduce the symptoms of allergic rhinitis, and the inflammation caused by osteoarthritis. (8,9) Curcumin is the active polyphenol in turmeric, a member of the ginger family and another potent anti-inflammatory spice. It is particularly associated with protecting the liver, and a paper published in 2017 suggests it may be useful in the treatment of non- alcoholic fatty liver disease. (10)

Green vegetables and fruits are packed with healthy fibre and nutrients. In particular, cruciferous vegetables such as broccoli, Brussels sprouts, pak choi, cabbage, cauliflower, kale, and kohlrabi contain polyphenols called glucosinolates. These break down into chemicals that have been linked to a reduced risk of many different cancers, including lung, breast and colorectal cancers.(11) Glucosinolates are stored within the cell walls of the plant and are released when we chew.

Olives and olive oil, a staple part of a Mediterranean diet, contain a polyphenol called hydroxytyrosol — the main active ingredient helping to protect fats in the blood from hardening. A recent review of polyphenols and brain health found that hydroxytyrosol is a highly bioavailable nutrient, meaning that we can extract and absorb it easily from food, and that it can protect the brain from neuroinflammation — although it has been found that female bodies utilise hydroxytyrosol more efficiently than male bodies. (12)

Blueberries contain a wide variety of health-promoting chemicals, but a lesser known polyphenol called pterostilbene has been shown to work synergistically with vitamin D — vitamin D regulates
a gene called CAMP that controls production of innate immune cells, whilst pterostilbene helps vitamin D to do its job.(13)
A recent study from King’s College London has also found that the anthocyanins which give blueberries their colour can help to lower blood pressure and improve endothelial function. (14) (Endothelial cells act as a barrier between the blood or lymph and the surrounding body tissue, as well as playing key roles in blood clotting and regulating blood pressure.)
In a randomised controlled study, 40 healthy volunteers were given drinks containing 200 g of blueberries or a control drink. Over the course of a month, in the volunteers who had the blueberries, blood pressure was reduced by 5 mmHg — similar to what is commonly seen in studies using blood pressure lowering medication. In a further study, drinks containing purified anthocyanins led to improvements in endothelial function.

Also found in red and purple foods, anthocyanins have been shown to have anti-cancer properties: as powerful antioxidants they protect cells from becoming malignant and also block cancer cells from reproducing. (15)

Blackcurrants contain more than four times the amount of vitamin C than does the equivalent weight of blueberries. One study found that chemicals in blackcurrants may help improve mood and neurodegenerative disorders, because they inhibit the action of enzymes called monoamine oxidases. These enzymes interfere with the regulation of dopamine and serotonin, the ‘feel good’ neurotransmitters in the brain.(16)

Aubergine (or eggplant) is a deep purple fruit rich in a polyphenol called nasunin that has been shown to protect cells from damage, particularly in the brain. (17) It also contains chlorogenic acid, a polyphenol similarly found in coffee, that has been found to promote the growth of a gut bacteria called akkermansia. This particular microbe has been linked to maintaining a healthy weight: obese people typically have no detectable levels of akkermansia in the microbiome. (18)

Why not try a veg box to help you eat your rainbow of foods? We love Riverford for fresh organic foods and recipe boxes.

In our seminar ‘The Eight Habits of Healthy People’ we provide more tips on how to eat a wide variety of fruit and vegetables.